CHAIRMAN OF THE BOARD OF DIRECTORS

Glendale Lodge #2243 has been selected to host   Bruce T. Masopust. Chairman of the Board of Directors for The Moose, during his travels through the state of Arizona.        This Lodge visit is scheduled for Thursday January 19,2023 at   12:00 pm.

Brother Masopust rose to become the Moose Fraternity’s Chief Presiding Officer on July 4, 2022, elected by vote of the Moose delegates to a one year  term at the Fraternity’s 134th International Convention held in Orlando, Florida.  Bruce had served as the Vice Chairman since July 2021, elected to the post at the 133rd International Convention held in Cincinnati, Ohio.  He has served on the Fraternity’s Corporate Board of Directors since 2016.  Prior to this, Bruce served as the Mooseheart Board of Directors for eight years, and the International Government Relations Committee as its Chairman in 2008.

Brother Masopust joined the Moose in Lodi, NJ, Lodge No. 1971 in 1984 and has served two separate terms as Governor.  He continues to chair  the Lodge’s Committees on Scholarship, Community Service, Moose Legion, Fellowship and Publications.  He is also the Lodge’s Application Review committee and conducts orientations for its member candidates.  Bruce holds additional memberships with Linden, NJ Lodge No. 913, where he serves on the Ritual staff, as well as Lodi, CA. Lodge 634.  Brother Masopust elevated to North Jersey Moose Legion 2 in 1996, he is a Past President, Chaplain, Vice President President and serves on it’s Ritual staff. 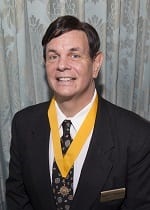 Join us as We Welcome

Let’s give him the “Best in the West” Welcome

Together We can Make It Happen!

He is a member of the 200 Division of the Moose 25 Club. Bruce received the Fellowship Degree of Honor in 2001 and was honored as Class Candidate for the 2007 conferral of the Pilgrim Degree of Merit.

Bruce served his community in the past as a member of the Lodi Borough Council and as Mayor. Professionally, he was the attendance counselor at Lodi High School from January 1, 1994 to December 31, 2015. He has recently retired from his position of Borough Manager of Lodi.  Bruce enjoys sports, concerts, Broadway shows and good restaurants. He resides in Lodi, New Jersey.

Now is the time for every member of our Lodge to share in their pride in the Moose by asking a friend, relative, or business associate to join.  Remind your prospects if his/her application is submitted now he/she can be part of the special class in the Chairman’s honor~ then enjoy years of fun, fellowship and security that the Moose Fraternity provides.  All Moose member and their families are invited to attend this special event and meet the Moose Fraternity’s Chief  Presiding Officer.